Rosemary Hayes has kindly written us another piece that helps explain the lives of women writers. In fact, Rosemary kindly wrote it for me last year, following last year’s theme, but last year I was not-quite-well and this year it works wonderfully to help us understand a more complex picture.

The Highs, Lows and Bits in Between for a Writer of Historical Fiction 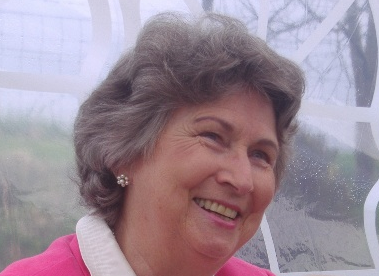 I’m not by nature a joiner of groups but I am very glad I overcame my reluctance and signed up to two or three authors’ societies. One of the best things about being part of a network of writers is the support, encouragement and advice you get from colleagues when things aren’t going so well.

Yes, it is great to share successes, but in my view, even more valuable to share the failures, the bad times, when your confidence is so shattered that you can’t believe you were ever arrogant enough to call yourself a writer.

Knowing that you are not alone, that all writers, however apparently successful, have been through these experiences, can be the only thing that keeps you going and spurs you on to dig yourself out of that deep hole of waning self confidence.

There have always been blips in my writing life. It had begun so well and, initially, been so easy. I had written an historical novel with a twist of fantasy; a story I really wanted to tell and believed in, which had been brewing in my imagination for years. I’d put it away for long periods and then taken out again, tinkered with it, asked others to read it, incorporated their advice. And then, finally, entered it in a national competition here in the UK, after which I forgot about it again and got on with my life, looking after my three children and an assortment of animals, working part time, doing voluntary stuff, visiting aging parents, coping for long periods on my own while my husband worked abroad.

Okay, so that’s what women do at these busy times in our lives. We multitask, switching priorities when we have to, juggling, keeping all the balls in the air and, if we are lucky, managing to fit a little time into our lives to indulge in our hobbies. And, back then, I did see writing as no more than a hobby. Having written my novel I felt that I had, at least, achieved what I set out to do and if it never saw the light of day, never got to be read by anyone except family and friends, then too bad. At the time, I knew nothing about the publishing process, about agents or editors. I was impossibly green. It was only much later, when I went to work for a large publisher, that I realized how lucky I had been.

The national competition was run jointly by a well known publisher and the Book Trust and the results weren’t announced until months later. I had genuinely forgotten about it when, to my astonishment, I heard that my story was runner up in the competition and that it would be published.

These were the good times. I worked with a brilliant editor who taught me so much and helped me fine tune my work. Four more books were commissioned and I began to believe that I was a ‘proper’ writer. But then the editor in question went on to higher things and, as so often happens, the new editor didn’t particularly like my work, was looking for new voices, and no more commissions came my way.

That was my first time in the wilderness and there was a long gap before I was taken on by Penguin Australia and had a very happy relationship with them, writing many books over a period of about eight years. Three of these were historical novels, all based on events in Australia’s history, with which I have a particular fascination (more of this later). Then again, the wonderful editor with whom I had worked moved on, my ideas for new books weren’t accepted, the work dried up and no other publisher showed any inclination to take me on.

At these points in your writing life, unless you have incredible self-belief, it is very easy to lose faith in yourself as a writer. Even though, by that time, I had a bunch of published books to my name, it made no difference. A lot of navel searching went on. I had no background as an historian, so maybe I should never have attempted to write historical novels. But even at this low point, some of these events from the past just wouldn’t let me go and I continued to mull over ideas, do research, jot down plot structures.

A couple of years went by when neither agents nor publishers seemed interested in my proposals and then, just at the point when I was ready to abandon my writing, a commission came from Hachette for a trilogy of historical novels – a family saga, this time, from early Victorian times to the second World War. Although the stories were essentially about an English family and their triumphs and tragedies, an Australian thread sneaked into them (transportation for a petty crime, the gold rush). But they didn’t sell particularly well and, although the editorial team wanted more from me, marketing and sales felt the books’ sales didn’t justify further commissions.

This was when I became aware of a shift in emphasis from publishers. Editors’ enthusiasm for a wonderful story, a great idea, frequently had cold water poured upon them by the sales and marketing departments and by the accountants who, as larger publishers gobbled up the smaller publishers, became more and more influential, their eyes always on the bottom line of the balance sheet. Editorial had to go through endless hoops to commission books and often a quirky, original idea that had so grabbed an editor, failed to pass the scrutiny of those looking for a ready market and guaranteed sales. Or, if it did, it became so diluted as to be unrecognizable.

Those Hachette books were the last ones for which I received an advance based on a first chapter and a synopsis. After that everything changed. Now you have to do all the research, write the full story and submit it and, if you are very lucky, it is accepted. Admittedly, this is not true for high profile authors but if, like me, you are ‘mid-list’ this is how it seems to be.

Post Hachette there were more fruitless years, then a new publisher and four more books; and just when I felt I had got my feet under the table there, the company was bought by a larger publisher, the Young Adult list was axed and all the YA editorial team were out of a job and their writers abandoned. But at least I was not alone on this occasion; there were so many of us that we staged a wonderful party – a wake to mark the burial of the YA list!
Since then, I’ve been taken on by a small independent publisher – set up by an editor, as it happens, who was involved in publishing my first novel, so I have come full circle. But who knows where this will lead, how many more books I shall have accepted? There is absolutely no certainly in this game.

I’ve been in the business for a long time now and seen a lot of changes. From being nurtured as a newbie, having long and wonderful associations with talented editors, having launches and promotion all done for me by publicity departments, to this new and scary time for writers when editors are either over stretched or inexperienced (or both) and an author is expected to do most of his or her own marketing and publicity.

Of course there are authors who actively enjoy putting themselves out there on social media, setting up school visits, turning every possible marketing opportunity to their advantage, but what of those of us who do not? I am essentially a private person, at my happiest being left on my own to research and read, dream up stories to flesh out historical facts and write them as well as I possibly can. I don’t mind sharing my professional life with those who are interested (like you!) but I want to keep my private life private. Of course, I do the social media stuff, but not regularly and usually reluctantly – and I resent its banality. It is not what I am and I don’t really enjoy engaging with total strangers just to blow my own trumpet. And yes, I know I’m missing out in terms of sales – but ideally I’d prefer that my books spoke for me.

Back, then, to what I mentioned earlier – to my fascination with Australia’s past. I have spent most of my life living in the UK, so why this urge to write about Australian history? Why does it hold such appeal for me? Well I suspect it is because I came to it afresh when I lived there. In particular, learning about the voyages of the early Dutch mariners, ploughing their way up the coast of Western Australia en route to the East Indies, years before Captain Cook landed on the Eastern side of the country in 1770, and discovering that the first European settlers in Australia were two young men involved in the infamous Batavia mutiny and massacre, marooned on the West Australian coast in 1629. Other shipwrecks followed with more survivors, no trace of whom was found. What happened to these people? Did they integrate with the coastal aboriginal tribes? DNA evidence suggests that they did. There are so many untold stories – extraordinary stories of hardship, endurance and bravery. A rich vein indeed, which I shall continue to tap, whether for my own interest or for a broader audience of young people. 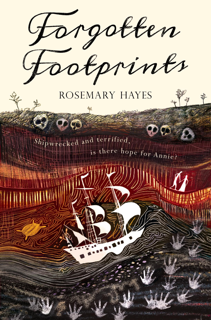 Rosemary Hayes was brought up and educated in the UK but has also lived in France, America and Australia. She has written over forty books for children. Her first novel, Race Against Time, was runner-up for the Kathleen Fidler Award and since then many of her books have won, or been shortlisted, for other awards. For many years Rosemary was a reader for a well known Authors’ Advisory Service; she now runs creative writing courses and workshops for adults.
To find out more about Rosemary or to order her books, visit her website
Follow her on twitter @HayesRosemary
Read her blog.

In October 2016, Rosemary Hayes took part in the 400th anniversary celebrations of the landing of Dirk Hartog at Shark Bay and spoke to school children and other groups in Western Australia about their rich maritime history as well as showcasing a new edition of her book ‘The Blue Eyed Aborigine’, about the Batavia mutineers. She has recently written another book ‘Forgotten Footprints’ about what might have happened to the survivors of the Zuytdorp shipwreck in 1712. 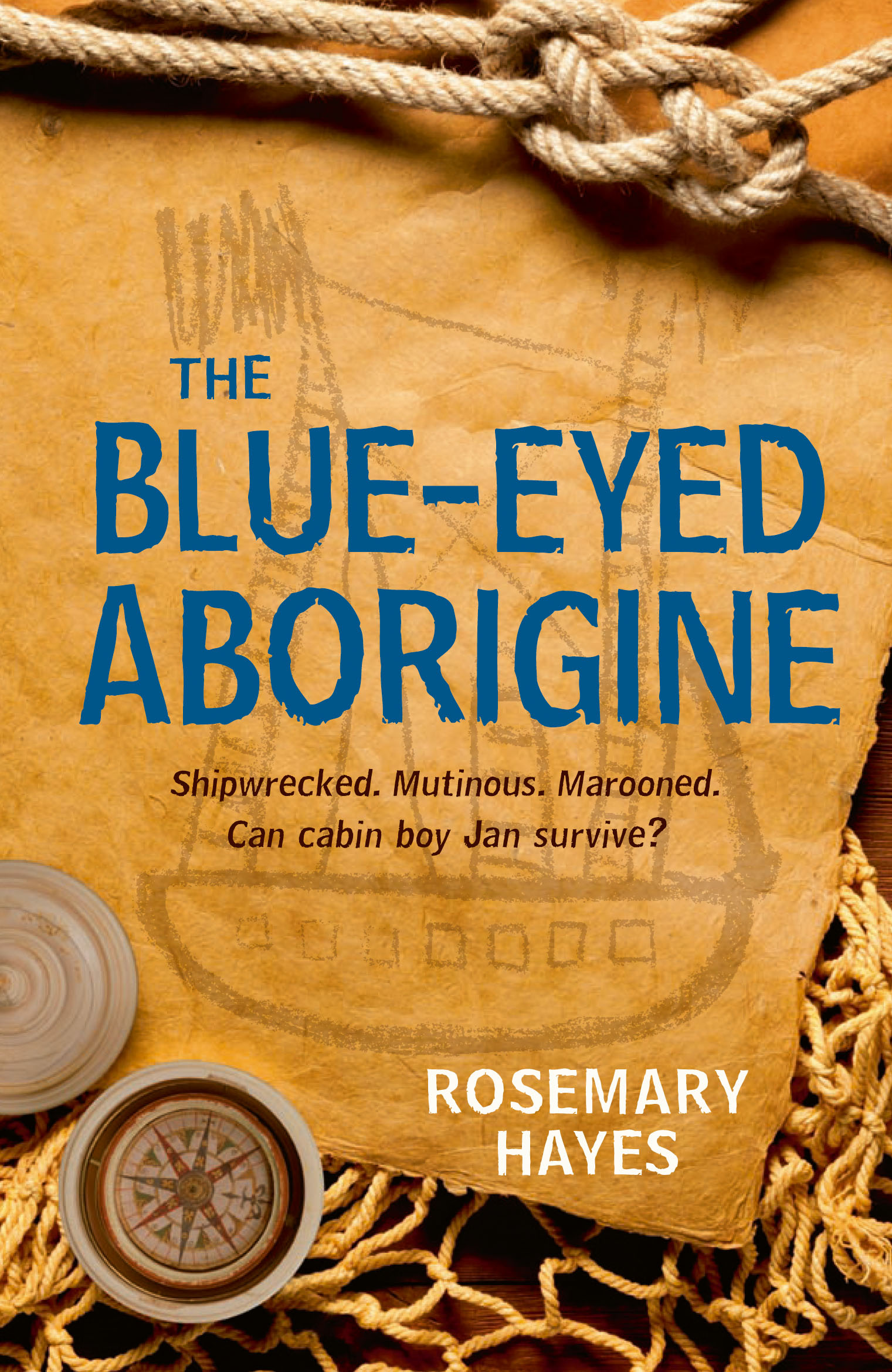 Rosemary will be visiting Australia again in 2018 to talk about her books and to visit the Melbourne based film company, Picture Co, who are developing a film based on ‘The Blue Eyed Aborigine.’