EDUCATE A WOMAN AND…

My Mum died just before Christmas at the age of 96 and I am so proud of what she achieved. It can’t have been easy growing up in the Depression. She won a scholarship to the town’s grammar school. It separated her from the village kids she had grown up with but she told me how when she had walked into the school library and saw all those books, she felt ‘this is everything I longed for’.

In today’s world, she would have gone to university but back then my grandfather could not afford the cost so she became a primary school teacher. I remember many of the girls she coached for the 11-Plus –that big hurdle that decided which high school you went to — and some of them were still in touch when she reached her eighties. She was so delighted that one of them went on to be a student at Oxford.

Because her grandchildren were in Australia, she never figured regularly in their lives (except for the occasional summer visit) and there was no Skype back then. But what we lost out on familywise, her local community gained. She was a councillor for 17 years and as planning chairman she protected the little villages from over-development. When mayor, she fought for a council housing estate that had no community centre or shops to have a supermarket and won. The building of the supermarket drew other shops, a doctor’s and a dentist’s, then a library and church were built. It gave the local people pride in their community and a sense of place. In her early nineties, Mum was still writing to the paper to save the little library from being closed down by the Tory Government.

She was a member of the village theatrical society and during her year as mayor, when the group was putting on a play, based on one of Thomas Hardy’s novels, at the town pavilion, she was sitting in the front row as mayor for the first act. After the interval her seat was empty and when the curtain went up, there she was on stage in nineteenth century costume to the great applause of the audience.

She did a great deal for the borough’s music societies, the village conservation groups and animal welfare. The town hall flew its civic flag at half-mast when the news reached them of her death and about eight former mayors came to the memorial service in the little village church. We gave her a great send off. Looking back, I’m filled with great sadness that distance prevented us sharing some of her finest moments but there must be so many stories like this. People say educate a woman and she will change a community for the better. In Mum’s case, I am so proud to say: how true! 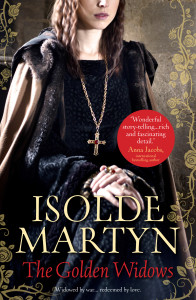 Isolde’s most recent novel THE GOLDEN WIDOWS deals with two young widows on opposing sides during the Wars of the Roses: Warwick the Kingmaker’s sister, Katherine Neville and Elizabeth Woodville, Lady Grey. Publication details at: www.isoldemartyn.com